Viewers Like YOU Make the Call: How Your Support Makes Quality Programming Happen

Take one company with a long history of producing high quality children’s media; legions of fans who ask, beg, and demand for “MORE Signing Time, PLEASE!”; an idea of bringing high quality media to television in the form of Rachel & the TreeSchoolers; and you would think it was a match made in heaven.

Unfortunately, TV executives took a look at the pilot episode of Rachel & the TreeSchoolers and deemed it “too educational for television”. (Yes, this really happened!) 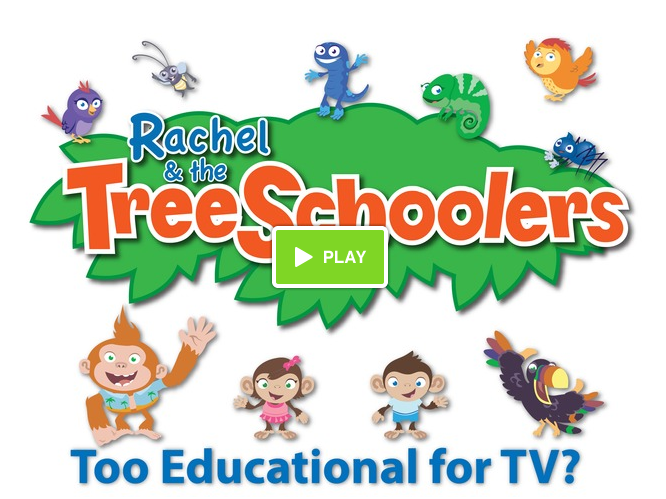 Now, if you know Rachel Coleman (and her team), you know that the answer NO, isn’t exactly a deterrent. So what did they do? They took the TV executives out of the decision making seat and replaced them with…. YOU!

In August of 2013, Two Little Hands Productions ran their very first Kickstarter. The goal was modest, set to fund Episodes 2 and 3. But since the fans were in the driver’s seat, they didn’t stop there. Instead, the Kickstarter raced ahead to the tune of $219,188, thus funding 5 full episodes, Episodes 2 – 6. 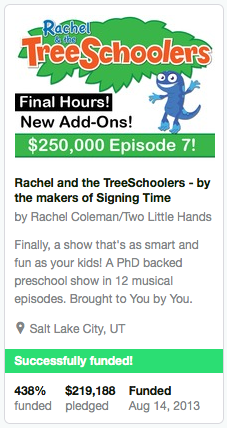 We are running a second Kickstarter campaign, this time with the goal set at $200,000, and a plan in place to move forward and produce Rachel & the TreeSchoolers, Episodes 7, 8, and 9.

When asked why it was so important that fans have a say in the direction of the kinds of media Two Little Hands Productions creates, co-owner Rachel Coleman says,

“We have a long history of listening to, and trusting our fans’ instincts. They’ve always pointed us in the right direction! Besides, I only want to make shows that our viewers want. Kickstarter creates partnership and trust between creators and backers. Backers have invested interest in spreading the word and doing their part to make sure the projects they care about reach the funding goal.”

Of course, when you participate in a Kickstarter, you not only get the deep satisfaction of helping to fund a worthy project, you get a choice of rewards, as well. By far, one of our most popular rewards has been to earn a spot for your child in the show. This time around, the following cities can take advantage:

There are many other fabulous rewards and a variety of price points for people to consider as backers. For instance, backers can choose from digital reward packs, hard copies of autographed DVDs and CDs, and so much more. Please check out our Kickstarter page for more details!

Finally, while we so deeply appreciate your vote of support through the campaign, know that your desire for quality children’s media, along with your fan support over these many years, is what drives us to do more, to do better, and to keep reaching higher.